What if Mark Henry was Pushed Like This 10 Years Ago

There is no question that Mark Henry will be a WWE Hall of Famer, but when you look back at his 19 year career, it makes you wonder how many titles could have he had. Mark Henry has been a ECW Champion, European Champion and World Heavyweight Champion, all one time. But how good is Mark Henry today compared to what he was 10 years ago.

On the March 12th edition of WWE Smackdown, Mark Henry approached the number one contender for the WWE World Heavyweight Champion, Roman Reigns, and called him out. Henry told Reigns that he had no identity, and that while he respected him, he needed to stop allowing Paul Heyman to get in his head. Henry continued by saying that there was no way Reigns could defeat Brock Lesnar for the title, reminding him that he was victim of Lesnar himself. Reigns took exception to this and attacked Mark Henry and used Henry’s words to fuel his fire heading into WrestleMania. While Henry was getting treatment backstage, he admitted that Reigns earned his respect and he could indeed defeat Brock Lesnar.

As I watched this, I remembered how good Mark Henry was. With WrestleMania a couple of weeks ahead, there has never been a number one contender that I have seen so much backlash against and fans feeling that he is not ready for the spot the way they are with Roman Reigns. Henry went out there to make Reigns look like a star and he did a great job doing it.

During the Summer of 2013, Mark Henry teased the world with his retirement. As John Cena was showing his respect, Henry embraced, and even said to his daughter, “baby girl I’m coming home.” Henry, the one who was very emotional that night fooled everyone and delivered a World’s Strongest Slam to Cena. He immediately put himself in the title picture. Henry simply had the crowd in his hand and in one split second had everyone with a look of confusion. He used his retirement to weasel his way to a title shot. What a genius. 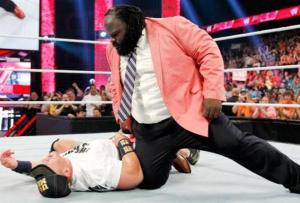 When you think about Mark Henry during the late 90s, first you think about his time with the Nation of Domination. The group that allowed The Rock to emerge as a Megastar. But then he became Sexual Chocolate. Clearly Sexual Chocolate was not a main eventer. He was a mid carder but his backstage segments were more interesting than his matches.

Between 2005 and 2006, there were rumors that Henry was due to become World Heavyweight Champion. Unfortunately for him, he was sidelined to a injury. He had just began to gain some momentum after getting lost in the shuffle during the expansion.

in 2008, Mark Henry became the ECW Champion and became a force to be reckoned with. While that was the 3rd brand, he made ECW must see TV. Fans were finally getting the Mark Henry that they were looking for. An aggressive man on a mean streak every week. He was not taking any prisoners.

Henry would fall out of the title picture when the ECW Brand was eliminated. However, during the Summer of 2012, he began his quest of inducting members into the Hall of Pain. Mark Henry was better than ever. This quest led him to the World Heavyweight Champion, Randy Orton. At Night of Champions, Mark Henry won his first World Heavyweight Championship. After winning, he dared the fans to cheer him, reminding them, that all they did was boo him through the years, don’t jump on the bandwagon now. During his title run, Henry made Smackdown must see tv.

Looking at his career, if Mark Henry had began inducted guys in the Hall of Pain during the early 2000s, maybe he would have been a WWE Champion. There is no way you can say he had a bad career, but you have to wonder, what if he would have had this push 10 years ago…