Since his debut to the WWE family, wrestling fans have awaited for the opportunity to see Kevin Owens wrestle on the main roster. When he made his debut at NXT Takeover : R Evolution and he defeated C.J. Parker in a squash match, fans were excited. The reason, he was still the same guy fans grew to love when he dominated the independent scene as Kevin Steen. Now WWE often changes characters name for trademark reasons, but no doubt, Owens was still the same guy. 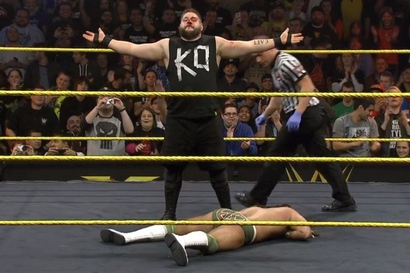 Anyone familiar with his work, knows that he and Sami Zayn, El Generico in Ring Of Honor, are rivals. Best friends turned to bitter enemies, the two put on countless classics all over the world.  On the night Owens made his NXT debut, Zayn finally won the big one. After chasing the NXT title for a few months, he was finally able to defeat Adrian Neville to become NXT Champion. Like any best-friend, Owens went to the ring to help celebrate. Just when fans thought that Owens was happy for his best-friend, he attacked Zayn and sent him and his newly won title out on a stretcher. That night, Owens put the world on notice.

NXT Takeover: Rival was a night wrestling fans anticipated for years.  Seeing Steen-Generico take each other to the limits on many occasions had fans crave to see this on a bigger stage. This was the night. A night in which fans saw a new Owens. If you are not familiar with the work of these two, you would have thought that Owens was always the dominate one. The truth is, Zayn was one who was always had Owens number. But on this night, Owens would not be denied. He did something fans have not seen in a long time, he won a world title by a knockout.

Recently Zayn had a match on Raw. He responded to the U.S. Title open challenge issued by John Cena. Zayn took Cena to the limit further than he has taken Owens recently, but in the end Cena was victorious. Zayn finished the match despite getting injured.Cena went on to give Zayn his props, even saying that he had a lot of heart. Owens took to twitter to let everyone know how he felt about this.

Not to be outdone, Kevin Owens confronted John Cena on Monday Night Raw. A man who the internet loves and has been wrestling in the WWE confronting the biggest guy in the company just six months in. What company is this? On this night Owens made it clear, he wanted nothing to with Cena’s U.S. Title. What he wanted was to take out Cena. On that night he did.

Owens reminds everyone that he does this for his family. His son Owen had one of the greatest reactions a child could have when seeing their dad wrestle their favorite wrestler. Owens and Cena wrestled at Elimination Chamber and personally I am calling it a 5-star match. It is by far the best match I have seen John Cena wrestle in. And I am not one who believes that Cena cannot wrestle. On this night, Owens was better. He proved it by pinning Cena in the middle of the ring. Kevin Owens does have his hands full. He has Samoa Joe, Finn Balor, and Sami Zayn all waiting for an opportunity to knock him off the top of the NXT ladder. But after he beat John Cena, the longest running face of the WWE, there is no doubt, that Kevin Owens is ready to take charge and become a household name.